European Voluntary Service through the perspective of Borce Dimitrovski 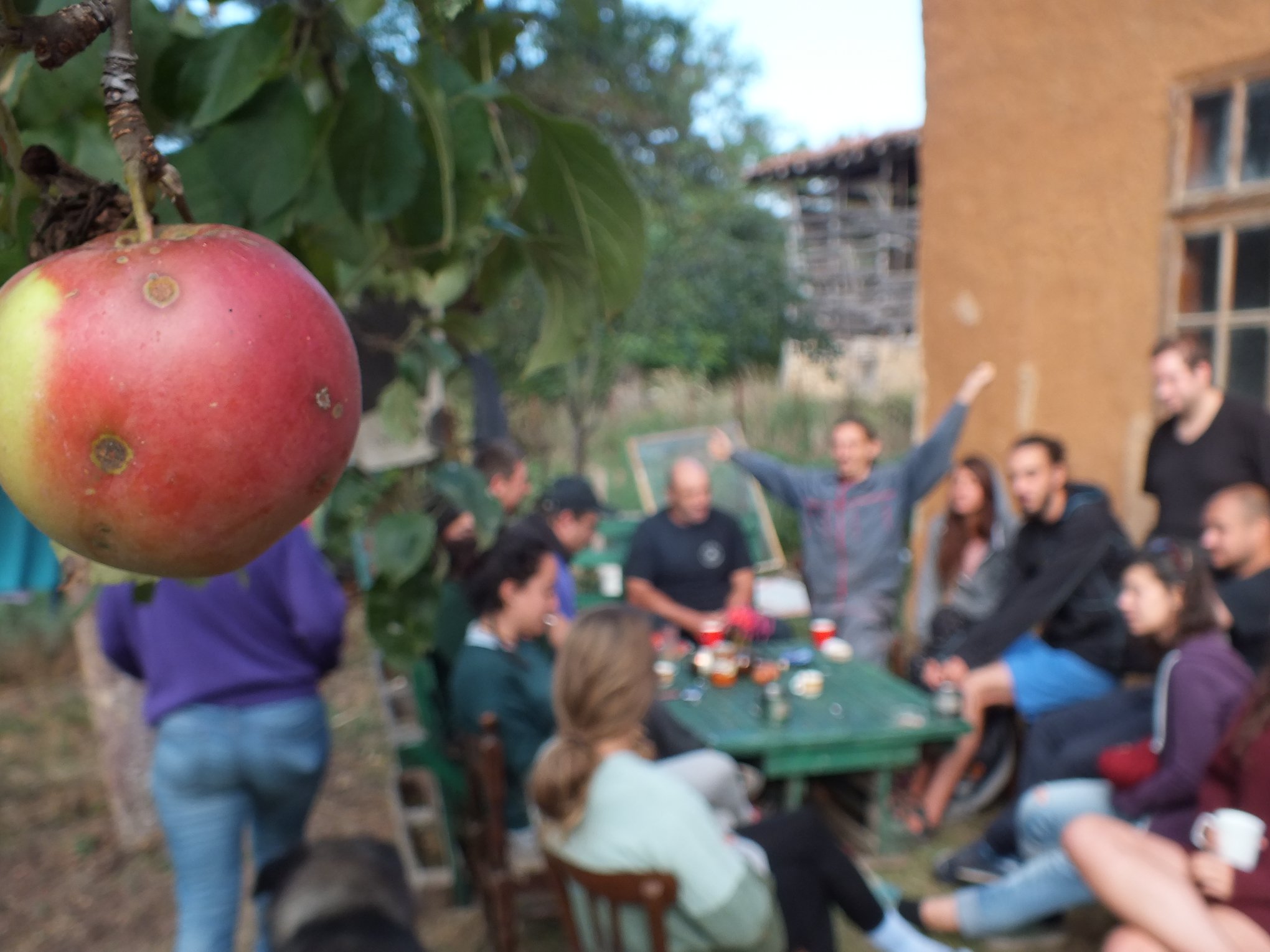 European Voluntary Service through the perspective of Borce Dimitrovski

Thinking of how I started my EVS experience I go back 3 years when my fiancé Simona Nikolova and me started our personal project Natural Perspective. Back then, being students in Skopje, together with a group of friends, we decided to boldly embrace ideas for an alternative way of living, different from the trend in urban areas. We visited several villages in different regions of Macedonia, visited the houses of our grandparents and our relatives. We also visited my grandfather’s house in the village of Star Istevnik, Delchevo with a group of friends. Those few visits gave Simona and me the motivation for the summer of 2017 to dedicate our time to the countryside, closer to nature. We met many challenges there and were also invited to participate in a youth exchange under the Erasmus + program implemented in Slovenia and Austria. After that adventure we went back to the village and after all the impressions gathered, we were a little bit demotivated facing the conditions we found after only 2 weeks being absent of the village house. Then a new twist came, which was an invitation by Green Association in Bulgaria to take part in Green Summit project as hosts, which is being implemented with the help of volunteers under the Erasmus + EVS program, focused on helping young people who want to to promote sustainable lifestyles in close contact with nature in small settlements. We accepted the invitation and Green Association came to support us with 15 young people, volunteers from all over Europe who were ready to help with anything needed. We organized a two day event at our house in the village of Star Istevnik where we did a building with natural materials workshop, trying to protect the facade of the house that had been damaged by rain, recycling some of the old furniture as well as clearing up some space. It was followed by an award from the association and it was an opportunity for Simona and me to join as guests throughout the journey that year. 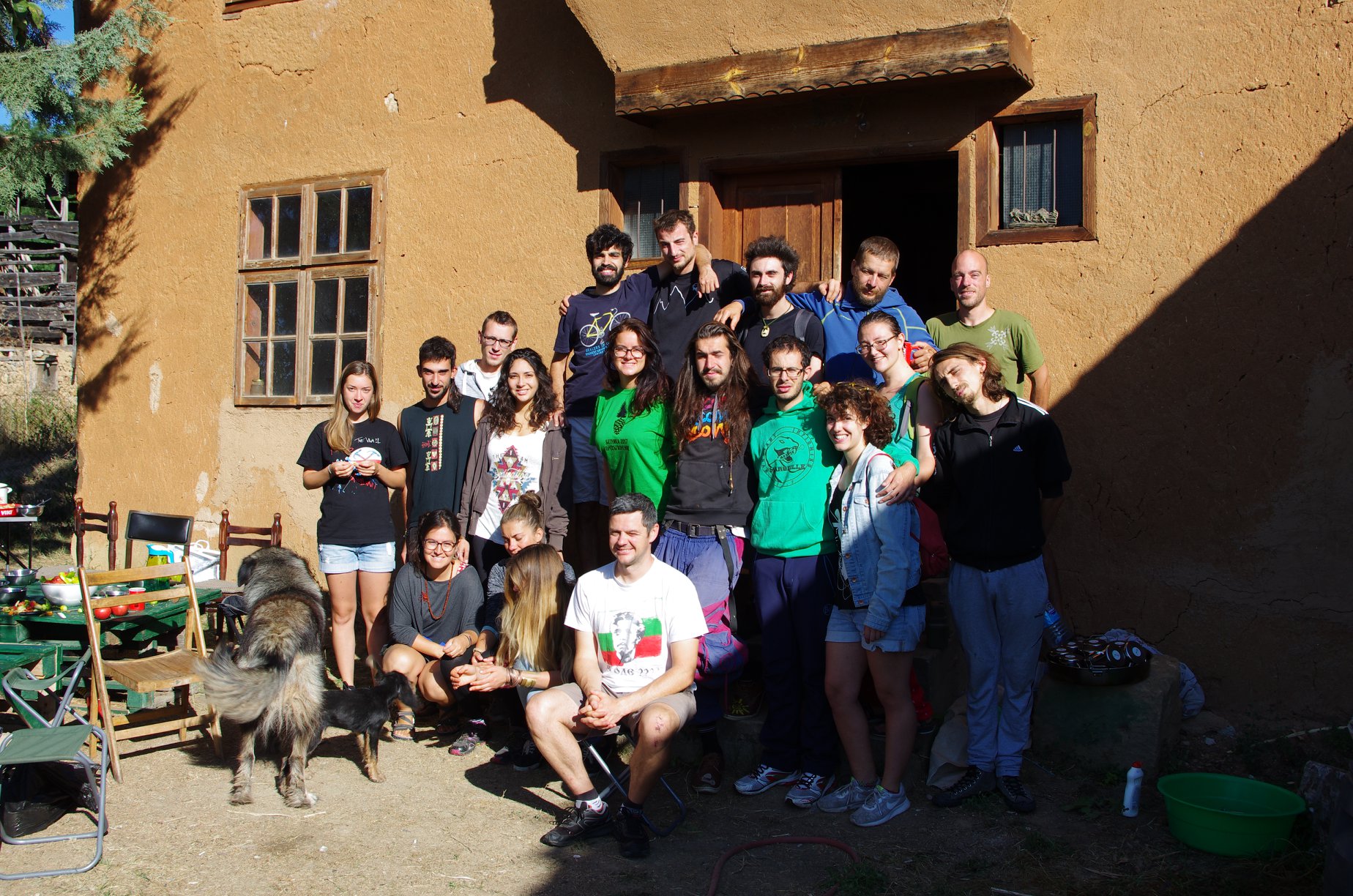 The following year started with the help of YMCA from Bitola, since I applied for a short term project, to volunteer in the Green Association and to participate actively in all activities and visits to the network initiatives. The concept of the Green Summit project in my opinion is very good because it is a good combination when young and motivated people from all over Europe are directed to have contact with young people from Bulgaria and with the support of the experienced Green team they collaborate, learn and exchange various skills.

Those 2 months were a great experience and motivation for me, since we visited 23 initiatives in 2018 and helped all those young and creative people who shared with us their vision, views of the world and various challenges they face on a daily basis. As an association we also participated in the Beglika Festival on its 10th anniversary and we as volunteers helped to make it happen. The festival itself seeks to promote alternative lifestyles, alternative healing, a variety of well-being techniques for the mind, body and spirit, music of all kind, etc. Personally, due to the fact that I am from the town of Delcevo near the border with Bulgaria and I understand the Bulgarian language well, I was more involved in promoting the activities of the association and the essentials of the Green Summit project. After those two months and the wonderful experience and hospitality of all those people, inspiring conversations and exchange of experience, I still had the desire to continue this journey. 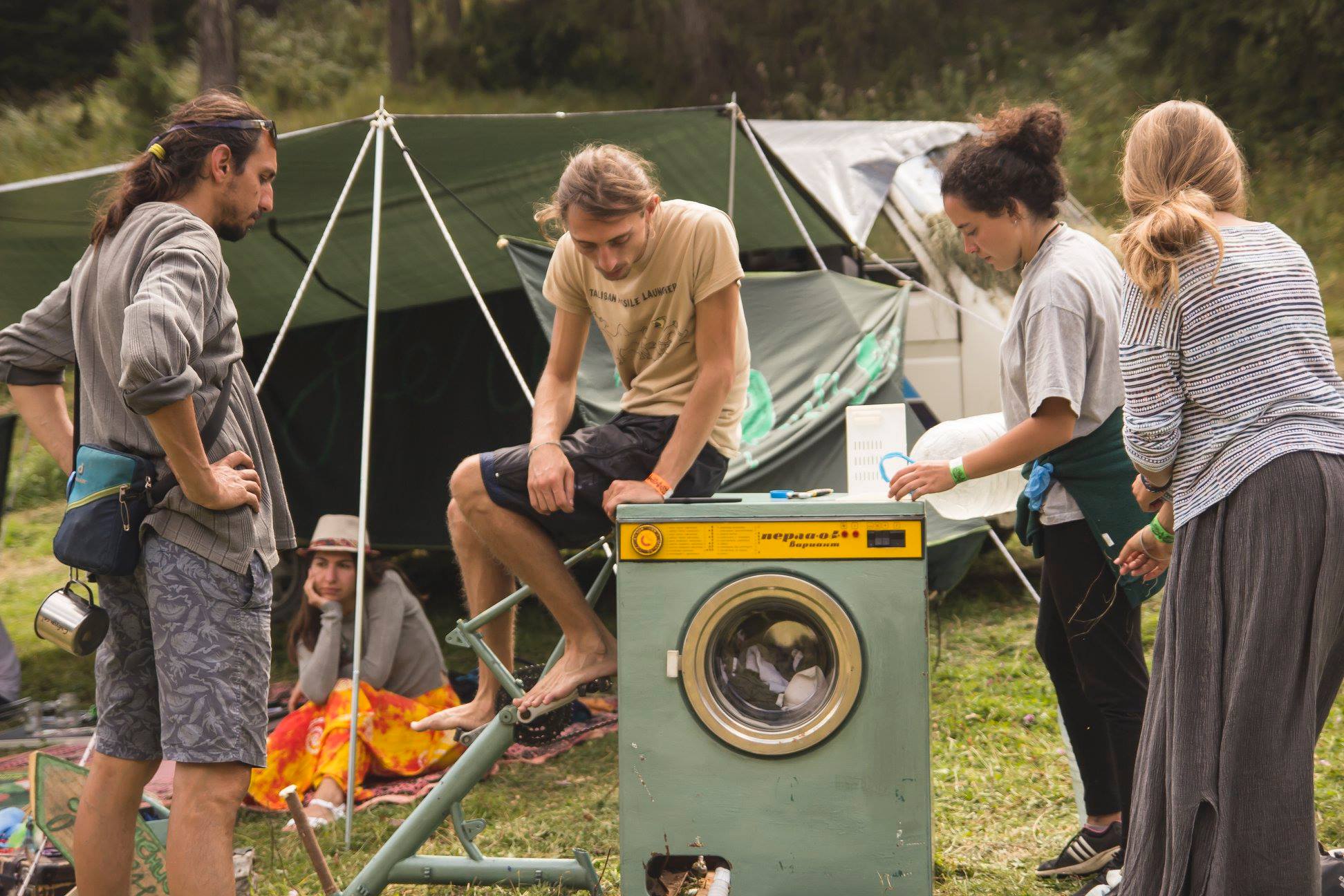 In the next 2019 together with my fiancé Simona, we decided to volunteer with Green Association, a long term volunteer for 10 months. Unlike previous years when the Green Summit project was only held for 2 months in the summer this year we had 2 groups of short term volunteers and in the 4 summer months we visited 30 initiatives and participated in several festivals. At the beginning of our new journey we had the opportunity to work with other volunteers and other friends from Macedonia on our personal project in the house in the village of Istevnik. During these few days as hosts with Simona we organized a series of different activities and workshops such as: restoring and repairing old furniture, plastering and repairing the walls with clay, lime and sand, whitewashing, designing and decorating the space and more. This year we also visited for the first time another initiative of young people from Macedonia in the village of Todorovci, Makedonska Kamenica, where we helped clean up waste from the Kalimanci lake and beekeeping and gardening activities, and it was going along with a lot of fun and music from all over Europe. 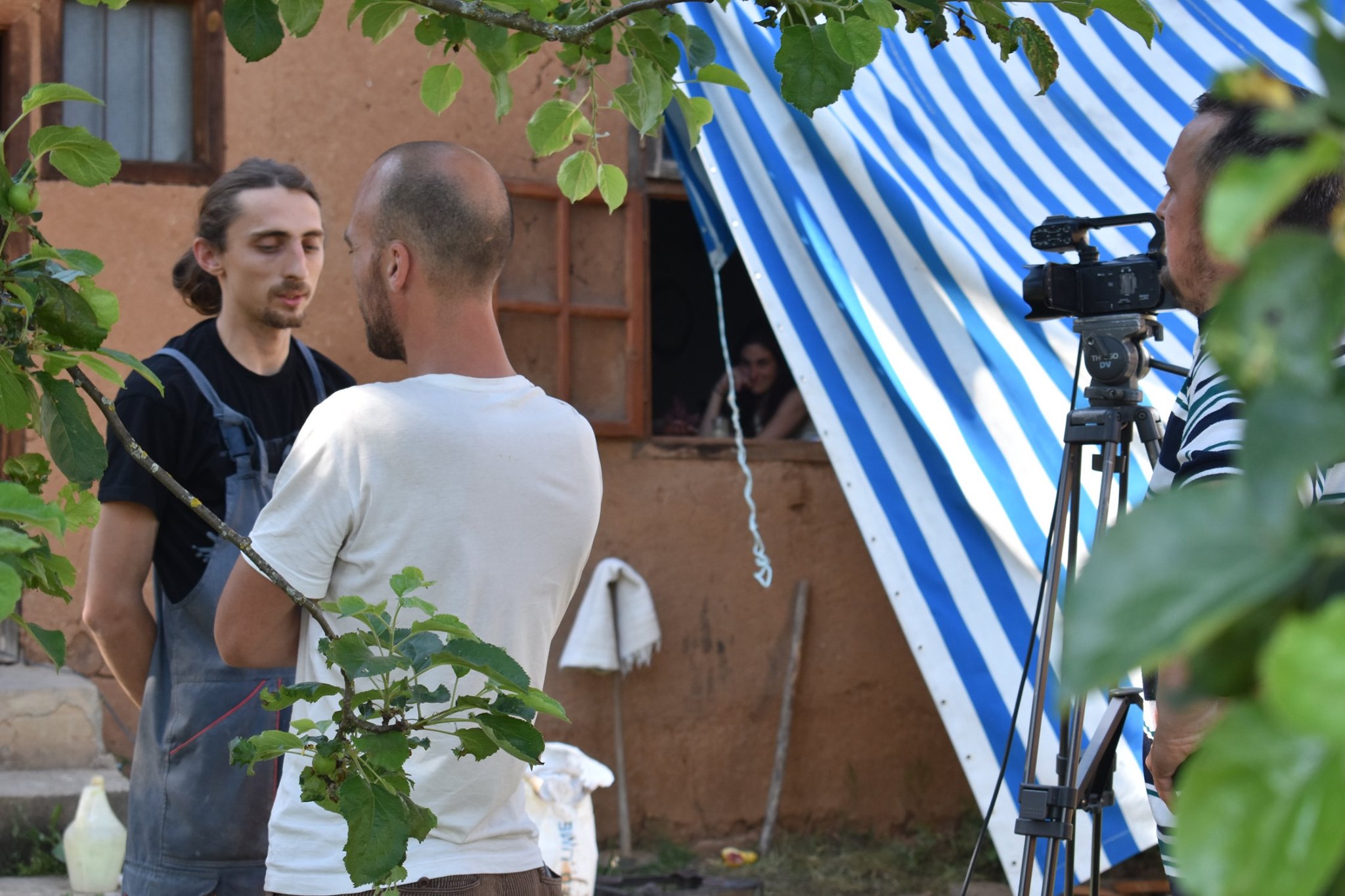 In the continuation of the project before Wake Up Festival, we visited several initiatives in western Bulgaria. There was a variety of activities depending on the initiative somewhere helping to rebuild old houses, planting forest gardens at another, assisting in gardening elsewhere, we also had permaculture design workshops as well as field activities and explorations, we participated in field trips several times and dome constructions. I have participated several times in the kitchen, cooking for the whole group. Wake up festival happened for the ninth time near Plovdiv city in the Rodopi Mountains for 6 days filled with various workshops and events such as: mind, heart and body well-being practices, creating a dome of branches and materials which we can find in nature, workshops on a variety of handicrafts such as: ceramics, macrame, making cutlery and more, community life forums and other alternative ways of communication and many more. We joined the organisation two weeks before the start of the festival to assist in its creation. Due to the fact that I was already familiar with some of the organizers and understood the Bulgarian language, at the Wake Up festival I had the responsibility of coordinating volunteers from the association, which meant taking on tasks from the organizers and their distribution among the volunteers, assisting in their realization. 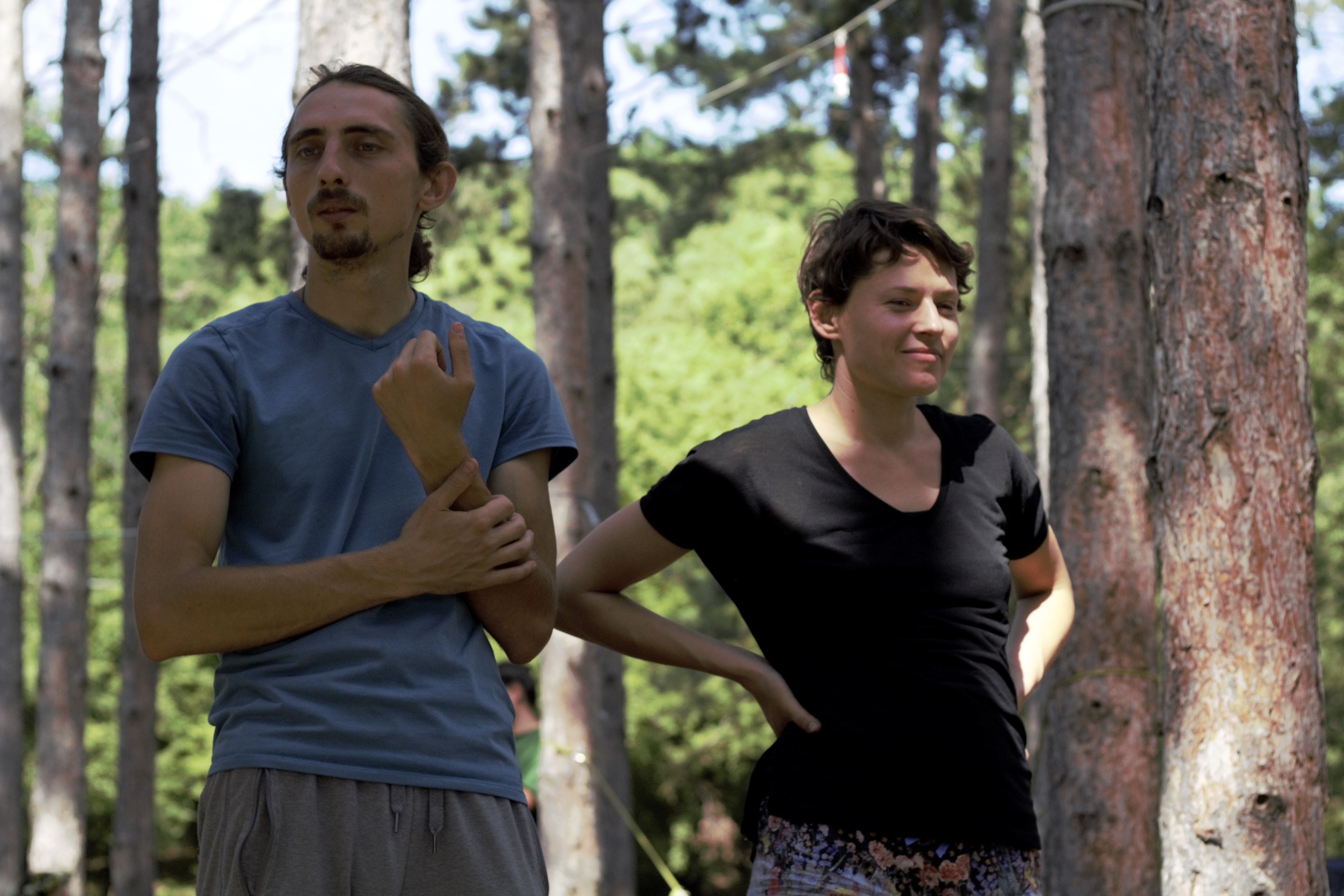 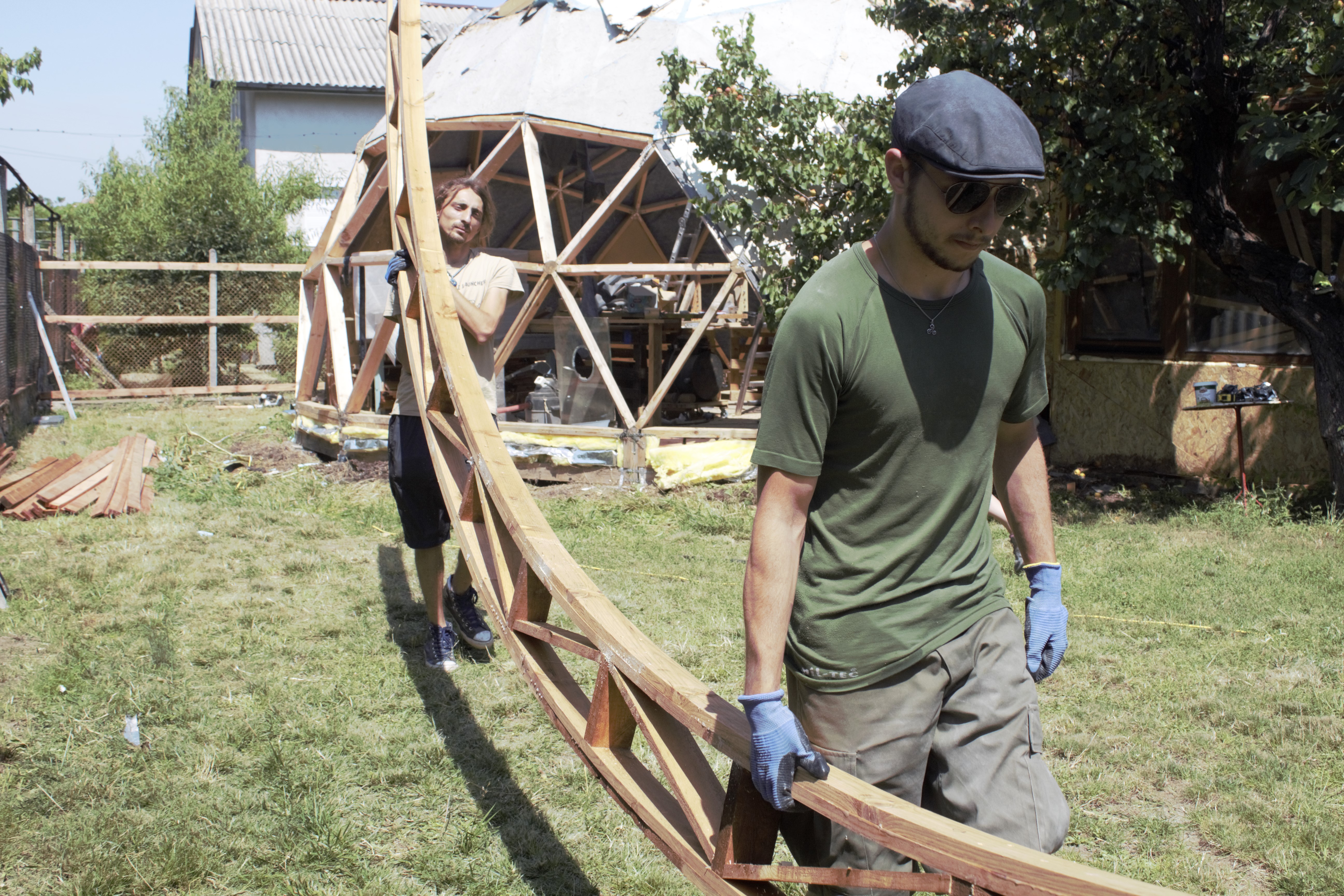 Since the start of the festival, I have been more actively involved in promoting the association in the Greendome and on several occasions I have participated in the festival kitchen where I have cooked for more than 100 people. After Wake Up festival we continued our activities in Green Summit and visited few more initiatives, in the meantime we had a training organized by the National Erasmus + Agency of the Republic of Bulgaria where we gathered with a group of volunteers from various organizations throughout Bulgaria. For a week we had the opportunity to share our experiences on various projects in Bulgaria as well as to talk about common challenges as volunteers in the country. And so, it was slowly coming the time to say goodbye to our first batch of short-term volunteers and prepare for the new group that arrived in just 5 days. Together with them, we started the journey the opposite way, first we went to the mountains to create a festival and then we continued exploring Bulgaria and the various creative places and natural beauties through it. Beglika 2019 I personally experienced from the beginning to the end, this time when we went up to the Rodopi mountains there was nothing that could be associated with the festival, just a few families who decided to spend the summer vacation on a mountain of peace and tranquility. With the help and guidance of locals and festival organizers we created a mini village simulation where we created and created, decorated, set scenes, set up and repaired some old toilets, organized workshop space, mowed, cleaned, cooked and a lot of other things. 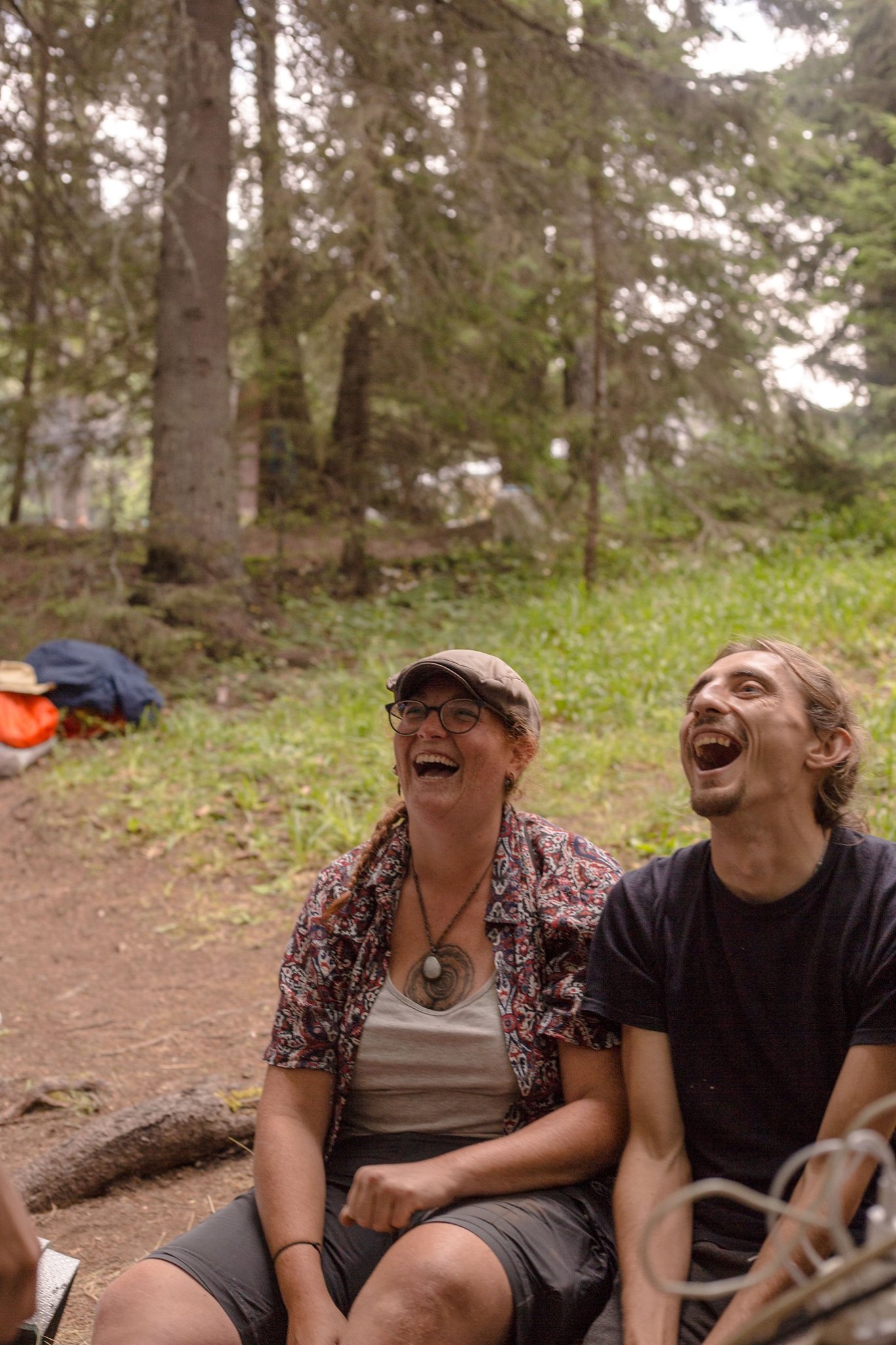 Then when the festival started I took shifts at the entrance to sell tickets and welcome the festival guests. By the end of the summer with the second group of volunteers we continued to work on the Green Summit project and continued to explore Bulgaria and get acquainted with a variety of brilliant initiatives. During this period we arrived at the easternmost point of our journey near the village of Ezerets in the municipality of Balchik near Varna, so we had the opportunity to enjoy some time on the Black Sea. After completing the second set of short-term volunteers, we stayed longer at our center in Momin Prohod – The Green House, where we focused more on implementing the ideas we gathered after the whole summer’s journey and trying to make our Green House as it is energy-efficient and self-sustainable as much as possible, as well as preparing for the winter. 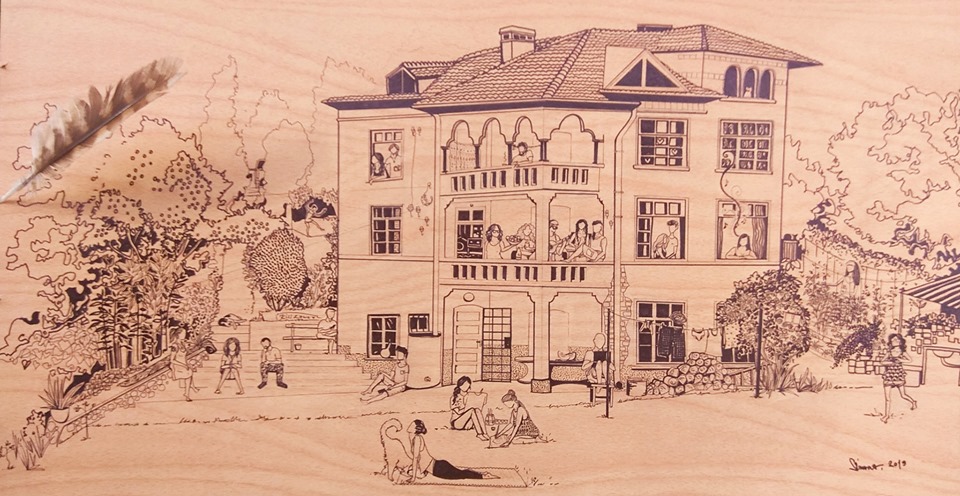 Also during the winter period we organized events that took place in a Community Center downtown Sofia where we promoted the Green Summit project and where people from different initiatives had the opportunity to present themselves to a wider audience in the Bulgarian capital. As volunteers and one of the initiatives of the Green Summit we had the opportunity to present our personal project Natural Perspective and share our ideas and views of the world with a wider audience. We also participated in DobroFest where we promoted the activities of Green Association among other volunteers. 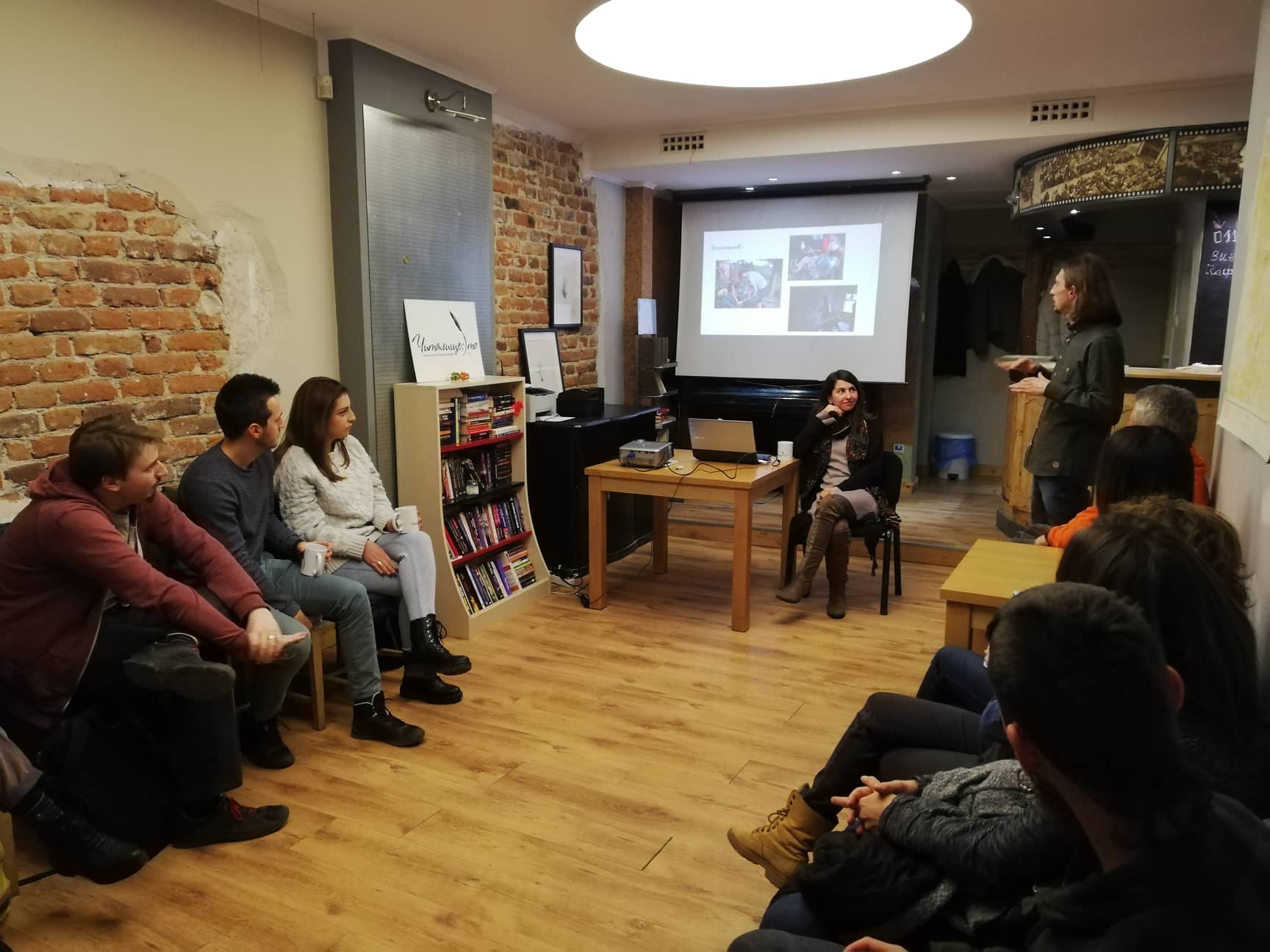 EVS for me is one of the biggest changes in my life and a time that will remain in my memory for the rest of it. All the experience I have gained here upon returning to my home environment I would like to share with the people around me and to be able to present all of the opportunities that this youth program offers across Europe. Such projects give many dreamers hope for a better tomorrow and put their ideas on a piece of paper to receive support from donors and programs. Bulgaria will be remembered by me as land of welcoming people with wonderful ideas and wishes and hosts willing to share with other people. In the future I hope to continue all the cooperation with Green Association and after the project is completed to continue visiting all of these initiatives, supporting each other locally and help the whole network goes on. 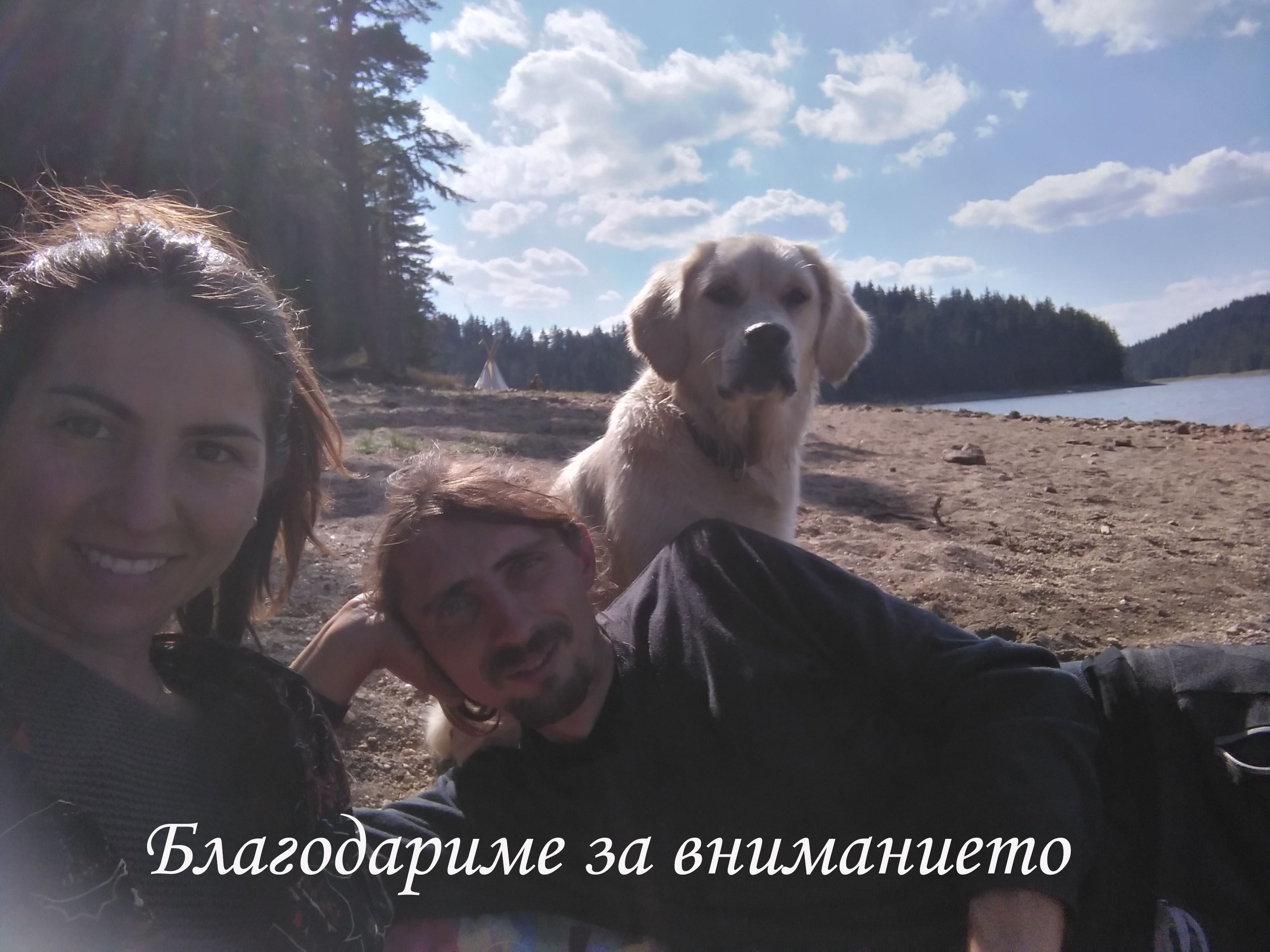