The Story Of Our Green Summit 2018 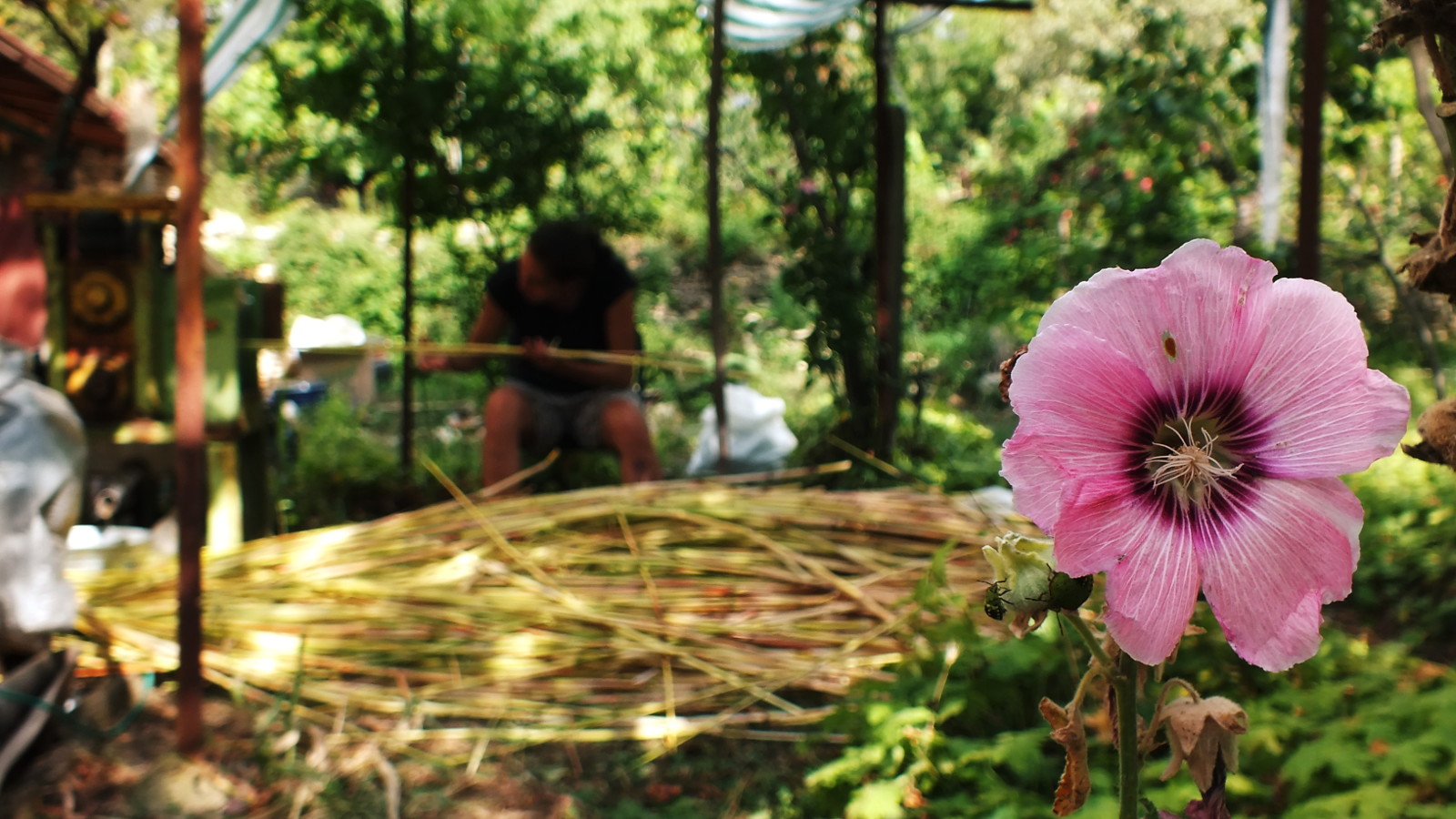 The Story Of Our Green Summit 2018

Hello, Greenies in the world!

As you might already know, last Summer we have carried out the second edition of the Green Summit: 23 days, 23 hosts, countless inspiration, ideas, people, projects, places and emotions!

Our adventure began on 1st September, and it started in the best way possible: spreading around!
Some of us went to Sredno Gradishte, a village in the middle of Bulgaria, while others headed to Zhelen, one of the oldest community in the country.

In Sredno Gradishte we helped Domashno.org (website, FB page) to make their excellent wine, collecting the grapes, cleaning them and letting nature do the magic. Then we went together on sugar cane picking and we also learned how to make the juice out of them – with the aid of a quite huge and noticeable machine! 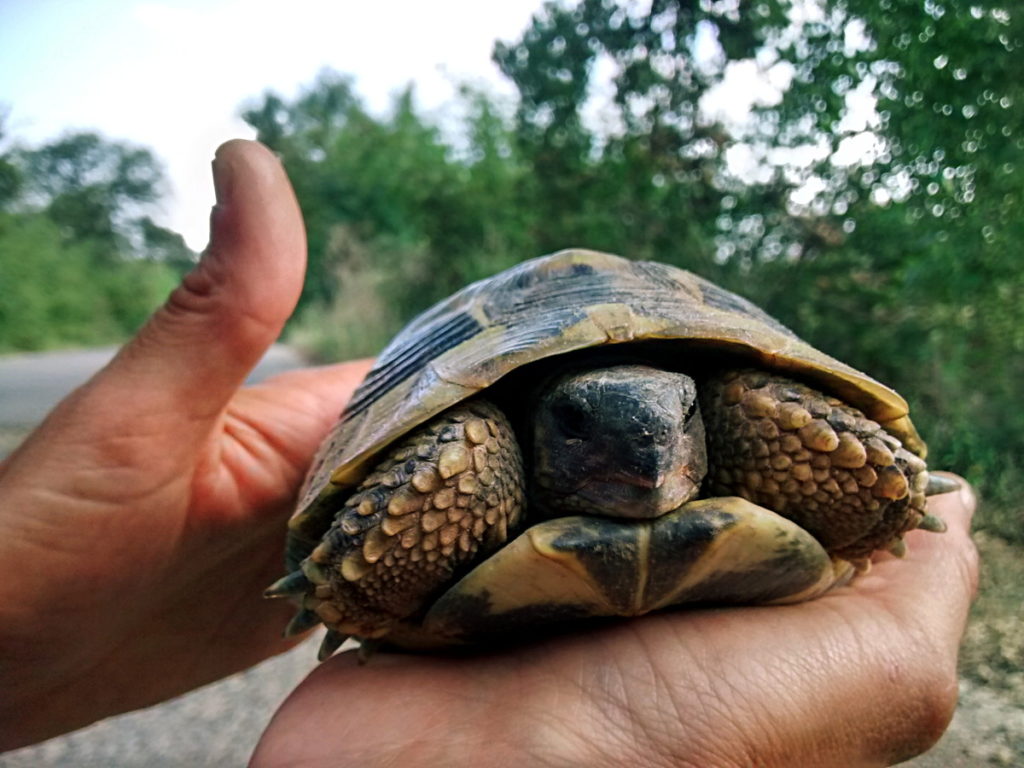 On the way, going back and forth between these places, we also found time to save a nice turtle from the road!

In the same group we moved on to Izvorche (Здравница “Изворче”), exploring the community life over there, working the land and transferring the recently acquired knowledge about sugar cane juice – with a smaller, this time, yet noticeable machine.

Meanwhile, in the other group in Zhelen we dealt with construction building using natural materials, more specifically helping Vladi with the ceiling and the roof.
Then we left for Gorna Bela Rechka in occasion of the Flock Gathering event (Събиране на Ятото): we helped preparing it, cleaning around and setting up the place, and finally we even took part in it and practiced horo (ХОРО), a traditional Bulgarian dance.
Lastly, after stopping in Zhelen – which was on our way – to help out a bit more, we reached Bunovo where we have been involved once again in construction using natural materials, this time to build a Yoga hall for a local community called Shalalandia (ШАЛАЛАНДИЯ – дом на изобилието, долината на с. Буново, which translates as “SHALALAND – home of abundance, valley of Bunovo village”).

The two groups reunited in Dolna Dikanya, where we helped to set up the first edition of the festival Terra Nomadica. There we also met Isabelle, a Swiss journalist who was travelling in Europe to carry out her project Joy for the Planet. We invited her to join us in our next stop, the only one in Macedonia, and she eventually awarded Borche with the “41st Nominee of Joy” for his project in Star Istevnik – she told this story herself in a beautiful way in this video. During our stay at Borche’s place (Природна Перспектива – Natural Perspective), we helped him to prepare compote and jam out of plums and we took care of some renovation works inside the house as well.

Back to Bulgaria, we hit Frolosh – a beautiful semi-abandoned village near Blagoevgrad – where we learned how to prepare lyutenitsa with our hosts Svetlio and Irina and their project “Bahchite” (Бахчите). We helped out a little bit with their garden and we also had some time to explore the enchanting nature all around! 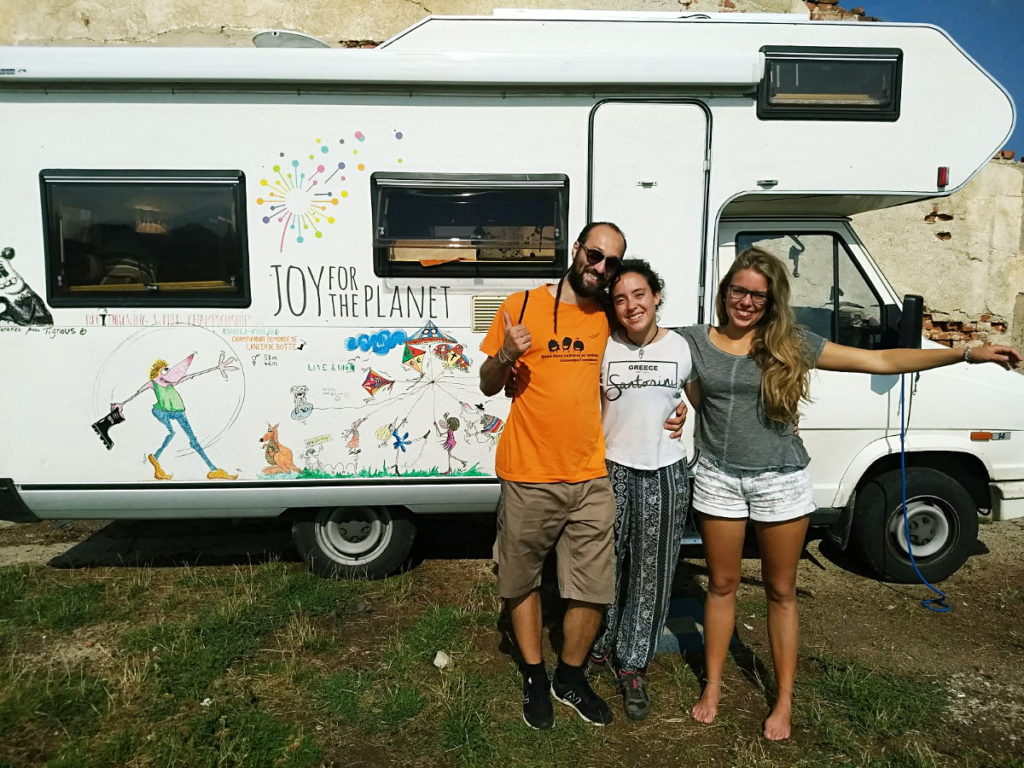 Michele, Laura and Ludovica with Joy For The Planet

Time to split again: one group headed north, while the other one proceeded in direction south-east.

With the first group we quickly passed through Korkina to visit the Green Training Centre and checked upon the good work that had been previously done by some of the volunteers over the couple of months just before the start of the Green Summit: wood flooring in two rooms, building a wooden library, digging a canal for water pipes and finally arranging books in the library.
We happily took the chance to try out Mira’s excellent cuisine, then we went to Vladaya where we have been warmly welcomed by Rumen in the Community “Inspiration” (Задруга “Вдъхновение”). We’ve helped him cleaning up what was left of a building which was torn down, to make place for a geodesic dome that will become a cultural and educational event hall.
After such hard work, we definitely needed some relax. The good thing is that Yana was awaiting for us in Dramsha, where we took part with her in the Art Therapy workshop (hosted by Art&therapeya).
Before reuniting with the rest of the group, the last stop was in Sofia, the capital city, where Green Association has been on air live in national TV for the first time, hosted by Преди обед (the video is available in Bulgarian language only: Селото в града или градът в селото?).

The second group advanced towards Dolen, a little old village immersed in the magical atmosphere of the Rhodopes mountains. We have been hosted by Vesko (from Амфитеатър село Долен | Amphitheater village of Dolen) and we helped working on the renovation of an old house, once again using natural materials and ancient but effective techniques.
After that, we reached Gudevitsa, helping with renovations and construction works in the community centre (НЧ Бъдеще сега / NC Future now).
Some volunteers left earlier to help a farmer in Borikovo, a small village nearby, collecting straw in the field to feed the animals during the winter.

The day after that, the full group of volunteers was reunited once again in Belashtitsa. Valentin (from Еко Етика/Eco Ethic) told us his story and showed us the dome he built. The next morning, just before leaving, we did a clean-up in the public forest. 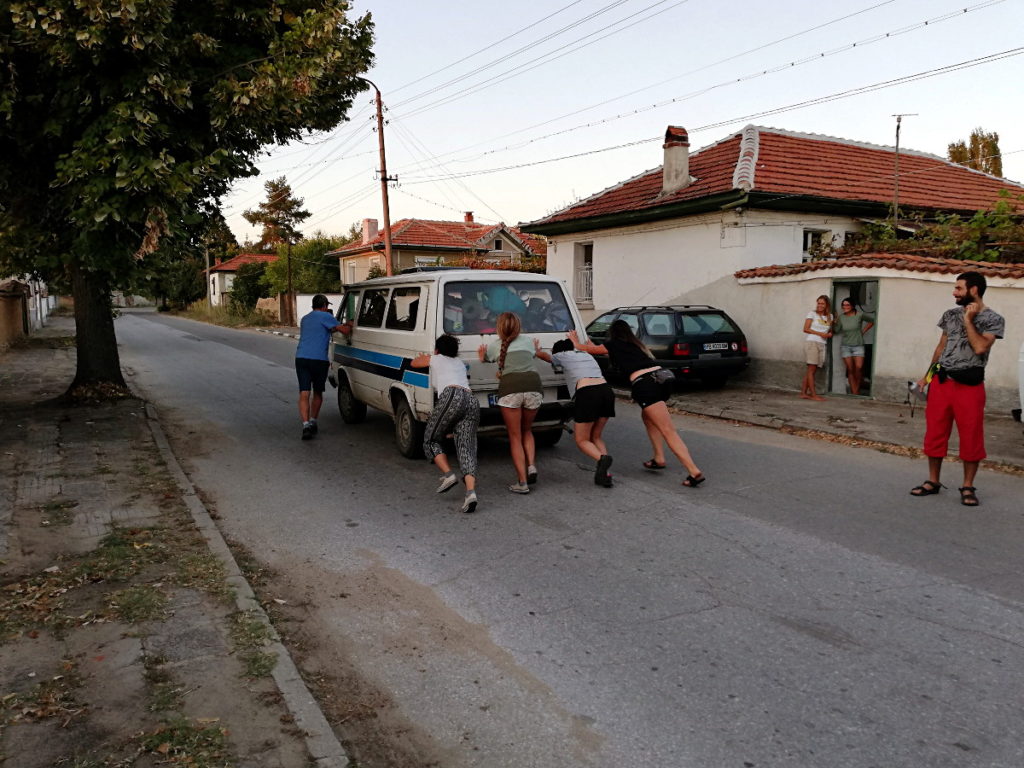 Our van is not only veggie-oil powered: it is also girls powered!

Here the group split one last time, before gathering in Momin Prohod on the final day of the Green Summit.

A few volunteers went to Akandzhievo, helping Campfirebg to realize their Glamping project.

The rest of the group carried on with the journey a few days more.
First we made a short but intense stopover in Streltsi, where we intensified our wine-making skills and had an interesting workshop on how to make handicrafts by working wood. Miro also showed us some of his very beautiful creations (Mir’o Woody)!
Then we left for Yasenovo and Shipka: since these two places were so close, we took both of them simultaneously, alternating here and there between different volunteers, even throughout the same day.
In Shikpa we cleaned up the area surrounding the community centre, while in Yasenovo (in the ecocentre Doraya – ДоРая) we built a dry toilet out of wooden pallets – it’s really shocking to realize how much water we throw away just because of our physiological needs, when they can just be helpful to nature instead! 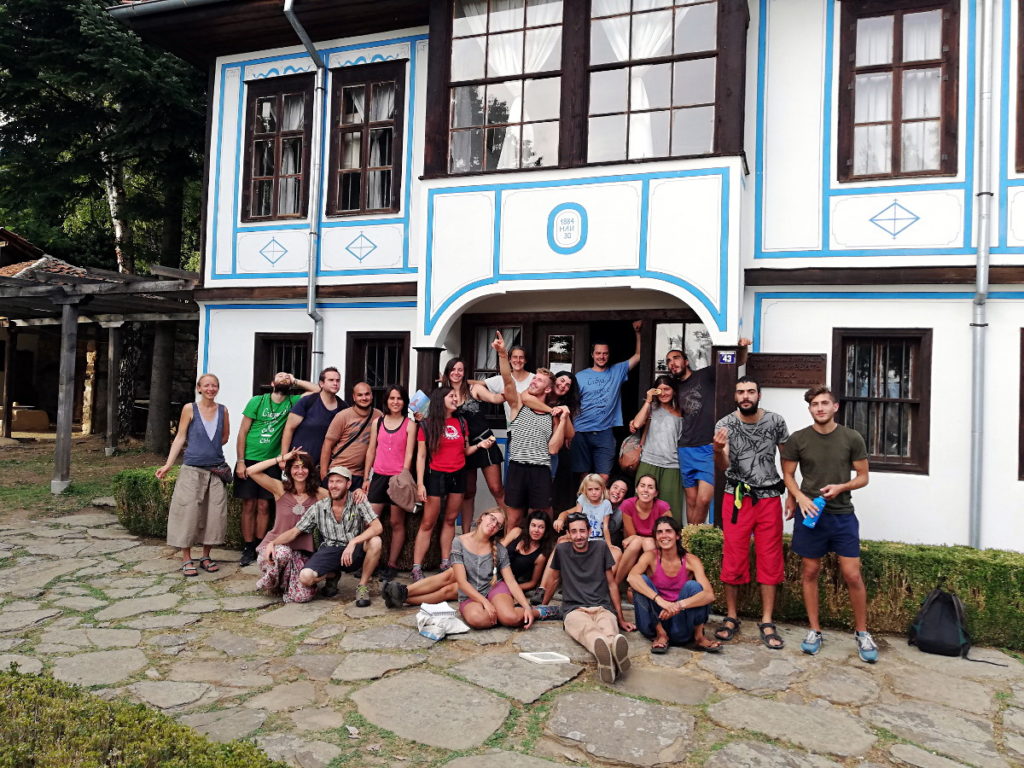 Just before moving on, the volunteers took part in a treasure hunt organised for them in Shikpa!

In Dimovtsi we have been welcomed very friendly and warmly by Petko, who also presented to us his ecovillage project “The Xperiment“.
With great pleasure we helped him as he needed, splitting in two groups in the most traditional of ways: hard work for the guys, digging a channel to prevent water pipes from freezing during winter, while the girls chained to clean one of the rooms, still full of rocks and dust – which can also be a very hard work, to be fair!
In the afternoon, Petko showed us the surroundings and a few volunteers even engaged in a “pine cone fight”, immersed in the nature over there!

On the way back, we managed to squeeze in an interesting visit to the Buzludzha Monument… and even a concert, in the hall of the Art Gallery in Kazanlak. On the stage there was the Bulgarian formation “Diha Yergus”, a musical project blending ethno, world music and ambient, resulting in a unique mix of modern sound and ancient Bulgarian folklore (including traditional instruments such as Gaida and Kaval, respectively a bagpipe and a flute), all performed by extremely talented musicians – curiously enough, one of them was Vesko, who hosted us in Dolen!

Finally, we arrived in Momin Prohod to join the rest of the group, on 23rd September.

Before putting an end to this amazing experience, there was still one last full day ahead of us, with a lot of work to be done in the beautiful Green House!

So, this last time we divided in many groups: some worked with cement to even out the street outside the entrance; some others refurbished a few windows by removing the painting and scratching them with sandpaper in order to polish them and give them a new fancy natural look; other volunteers dealt with more creative tasks, painting tents, t-shirts and finishing a drawing of the map of the Green Summit on a hammock that served as a flag; the other tasks involved rearranging a few things around, documenting all the processes through photos and videos, taking care of the lunch and last but not least keep the spirit of the whole group high!

By the end of the day, we celebrated our successful adventure by singing, dancing and having dinner with other greenies and friends who came to visit us.